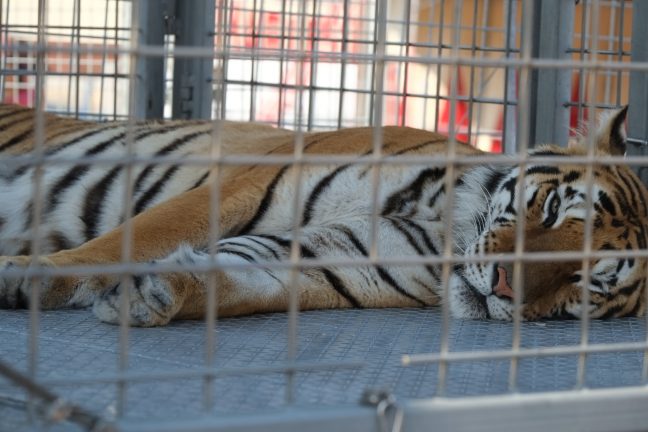 Prague, 18.07.2018 – Recent police raids in the Czech Republic as well as research by the international animal welfare organisation FOUR PAWS show that tiger trade is not only an issue in Asia: The lucrative commercial trade with a highly protected species and their parts is happening right in the centre of Europe as well. On Monday 15th July the Czech police along with custom officers raided properties in Prague and in central and northern Bohemia in suspicion of illegal killing of tigers and possession of tiger products. Today on the 18th July the Czech authorities announced that they seized a recently killed tiger at one of the properties and that one of the suspects was processing tiger bones and other tiger products. The suspects were shooting the tigers in the eyes to not damage the skins and that the tigers were killed and used to make tiger broth. Furthermore, the Czech authorities also raided the Vietnamese market, Sapa in Prague and discovered tiger meat and products on sale.

One of the target facilities raided this week belonged to well-known circus leader, Mr. Ludvik Berousek. FOUR PAWS research conducted in June show a meeting with Mr. Berousek where he proudly showed his tiger breeding facility near Prague and discussed the sale of tigers to Asia. Mr Berousek offered to sell the tigers to Asian buyers and to help facilitate the documents and transfer and boasted that he had already sold tigers to China in the last three months.

Kieran Harkin, Head of Wildlife Campaigns at FOUR PAWS, states “It is shocking how the EU does so much to combat the trade in wildlife in other parts of the world, but we have turned a blind eye to protecting an endangered species on our own doorstep. FOUR PAWS is calling on the European Commission to protect all tigers and to ban the commercial trade in live captive bred tigers. The EU should take a leading role in protecting these endangered species and ban all commercial trade ensuring tiger traders and businesses have no place in the EU”.

In the 20th century the world already lost over 90 per cent of its tigers with current estimates indicating that there are only about 3,900 tigers left in the wild. The relentless demand for tigers to be displayed commercially and traded for their body parts to be used in traditional Asian medicines significantly contributes to this decline. Shockingly, tigers born in captivity in Europe can still be traded for commercial purposes such as circuses or for private keeping or for photo opportunities. In some European countries it is not only possible to buy tigers but to also rent tigers for private parties.

How can this happen in an EU-country?

The European Union does not only lack effective regulation concerning the trade of tigers or their parts, there is also no clear overview of the actual number of captive tigers and trade of these animals. No authority, organisation or country knows how many tigers are currently kept in Europe, where they are moved during their lifetime or how they are used for entertainment purposes, where they die and finally whether in worst cases these animals are being turned into tiger bone wine or traditional medicines. Only by ensuring there is no market for tigers and their parts in Europe the European Commission can be serious about contributing to protecting wild living tigers in Asia and playing a positive role in fighting the illegal trade of all wildlife. FOUR PAWS has launched a petition today through which all supporters can call on the European Commission to ban the commercial trade in tigers: https://help.four-paws.org/en/ban-tiger-trade